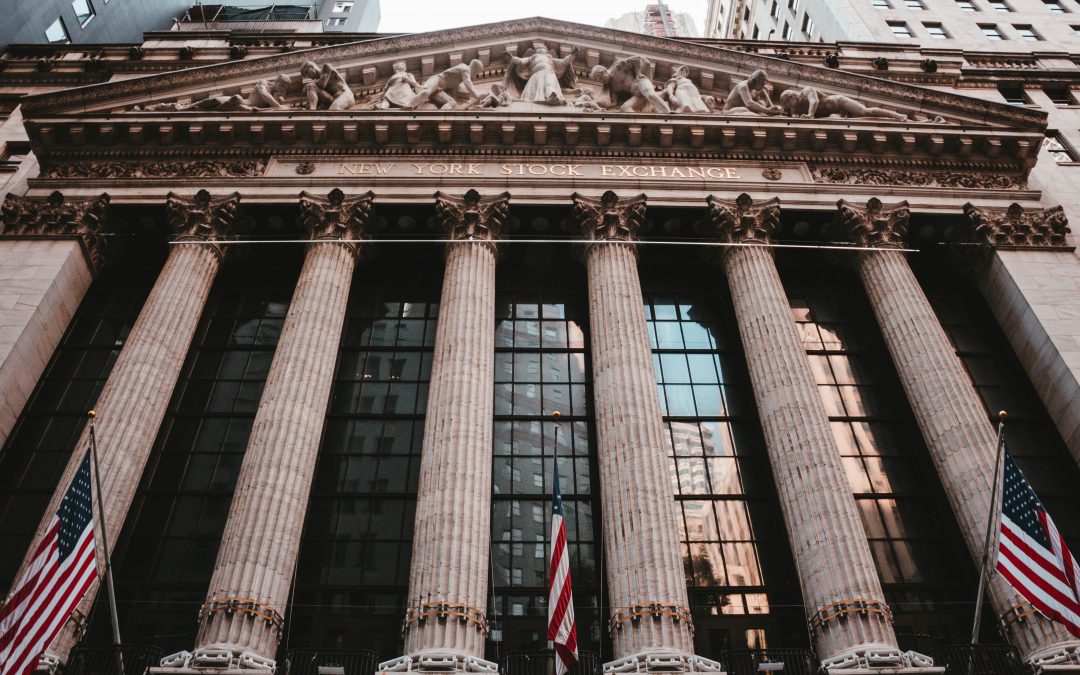 Everyone knows the story of how we began to use basic forms of currency, like metals (or rocks?) to replace the barter system, but most aren’t familiar with the history of what we perceive as the modern day investing (or capital) markets. While most think of stock trading or investing as simple as opening Robinhood or their brokerage account and easily searching for and investing in a stock, things didn’t start off so easy. Let’s start from the true beginning of the abstract “capital market” we know and think of today.

In the early 14th and 15th centuries, the first capital markets were formed through a financial exchange system in Antwerp (modern day Belgium — however there were similar types of markets formed in Italian, German, French towns even in the 13th century. This was the first on a larger, more international scale), which was the center for international trade at the time. This early exchange/market saw mostly promissory notes and bonds being traded or issued, but it was a start.

The early 17th century saw the rise of the Dutch East India Company (which interestingly still has the highest historical market cap — $7.9T — of any company to ever exist) — the first publicly traded company, which was traded on the Amsterdam Stock Exchange. This led to massive financial innovation; during this time [stemming from Amsterdam] we also saw the first derivatives, dividend distributions, futures trading, and short selling occur.

When the U.S. caught wind of this and was able to put similar concepts into action in the late 18th century, with the first stock exchanges being established, with the Philadelphia Stock Exchange being the first in the nation, and the NYSE quickly taking on some steam shortly after (excuse the “steam” pun as this took place during the railroad boom in the U.S.). It is interesting to note however that there is a common sentiment today that the tech sector is overweight in the public markets, but when looking at the chart below an interesting observation is that the largest sector in today’s markets (tech) is smaller relative to the rest of the economy when speaking historically: 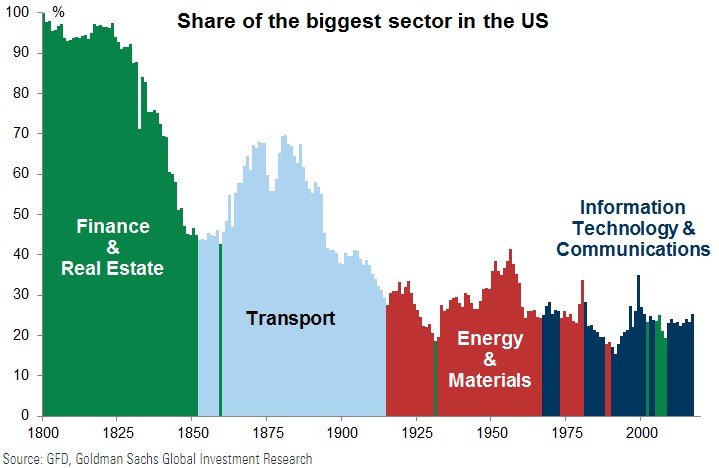 In terms of early private investing and fundraising in the Unites States; Much of early (19th century) private (and public — see above) equity consisted of infrastructure (which was considered the “tech” of the time) but also had a historically strong had in farmland and agriculture. Industrialization consolidated wealth in fewer hands as western society freed itself from agrarianism. These wealthy industrialists (“barons”) then had capital to employ in ventures that would otherwise have not had sufficient funds. Merchant bankers acted as pools for funds of middle class wealth. Crédit Mobilier was one of the first notable examples of modern “private equity”. Established in 1852 by the now forgotten (but no less notable) Pereire brothers, Credit Mobilier mobilized the savings of the French middle class into extensive infrastructure projects and railroad financing, including in the United States along with other bankers such as Jason Cooke. Other familiar names such as Rockefeller and Carnegie likewise contributed to major projects well into the 20th century. Lotteries back in the day used to also fund infrastructure projects; a George Washington lottery ticket used to fund a local infrastructure project recently sold to investors via crowdfunding.

Here’s a fun one, there was speculative investing back then too! Where the public sometimes concentrated their efforts is an often-overlooked establishment of late 19th century America: “bucket shops.” In the late 19th century, bucket shops allowed the American public to gamble small amounts on the movement of stocks and commodities on the New York and Chicago exchanges. Bucket shops were akin to racehorse gambling, but for the stock market. There would be no purchase of an underlying derivative, and the betting was purely speculation. As with casinos, the house always won, via manipulation of the telegraphic feed of stock prices, or pumping and dumping heavily-favored stocks. This was essentially the birth of the options and derivatives market. By 1889, the volume of shares wagered in bucket shops was seven times larger than the volume of shares traded on the New York Stock Exchange.

Moving back to broader themes, the end of the 19th century began to see advancements in statistics, and thus, tracking of numerical data. This led to the creation of market tracking indexes (which we can now purchase as index funds) such as the Dow Jones in 1896 and the earliest version of what we know of as the S&P 500 today in 1923.

The Great War (WWI) caused an American economic boom as the global financial sector shifts from war-torn Europe to New York. Newly wealthy Americans needed places to park capital, and banks took advantage. Banks offered loans to stock market speculators, speculated on land development, sold bad bonds to investors and even opened up divisions entirely devoted to market speculation, unbeknownst to retail investors. What the mass speculation (see: stock pools) resulted in was a similar mania to that seen in bucket shops, but with the purchase and holding of actual, publicly traded stocks/equities. The “Roaring 20s” was fueled primarily by this sentiment.

Unfortunately, despite a period of economic prosperity around the beginning of the introduction of these indexes — specifically the 1920s as a time of economic growth and prosperity — large amounts of speculation caused the stock market to crash in 1929, triggering the most catastrophic financial disaster the United States has ever seen. This triggered in a new era of financial/market regulations, coupled in with extreme innovation this century, and brought in a new financial era, the era where capital markets truly become established and accessible to the majority of the general population. We will explore the 20th century of capital markets in part 2 of this series. Stay tuned! 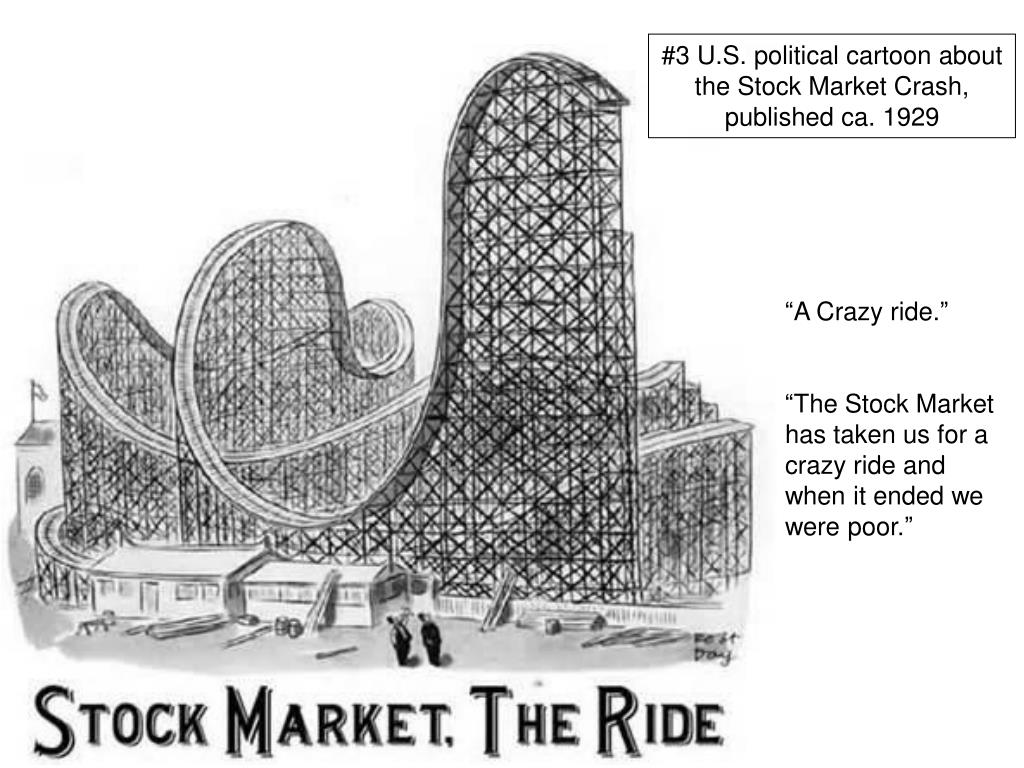